Graphic Designer or Visual Designer? Which One Do I Need?

Creative design takes many forms. Today there are several jobs that use the word "Designer" but have wide task and skill requirements that are needed to to do the job. There are Graphic and Visual Designers, as well as User Experience (UX) Designers, Web Designers, and User Interface (UI) Designers.

Are we having fun yet?

We remember a few years ago when creative designers were listed under one primary name: Graphic Designer. But digital technology has moved us into an era of specialization geared around our internet-focused devices.

In a creative world that has many options for the delivery of your design, job titles just naturally expand. The concept of a Graphic Designer is a little outdated now. Many of these roles have morphed into jobs that require a broader skillset.

But businesses remain confused as to whether they should hire for two common positions: Graphic Designer or Visual Designer. Do you need both? Only one? Which one?

We've outlined some key differences in the two roles.

Graphic Designers mainly work with print. But not always. You’ll find them developing and producing collateral materials like brochures, posters, magazines, and annual reports. Some of their basic skills include:

You’ll see the following design platforms on their resumes

Typically, these creative professionals will have a bachelor’s degree in graphic design or marketing/communications. They work in advertising agencies, marketing departments for corporations, or other marketing-related firms. In a small business, they’ll typically do project-based subcontracting in order to help create sales or other marketing collateral. However, they do not code.

Visual Designers make art in the digital world. They’re the conceptualists behind how web apps and ebooks look. They make sure your logo views well across multiple mediums.

Visual Designers are involved more in the strategy behind a design. They create a brand’s style and voice. While they can create a great design, they also communicate the reasoning behind it. Their job is somewhat of a hybrid because they have to have a good sense of how a user will interact with a design.

When compared to a Graphic Designer, they work less on print design, and focus more on digital. You’ll find them working on an infographic for a website, or a logo, or presentation. Visual designers typically work in Adobe and Sketch, but they need wireframing skills as well.

As you might imagine, Visual Designers make about twice as much as Graphic Designers.

Which Do You Need?

Depending on your project, a Visual Designer or a Graphic Designer might work...or you may end up wanting both on your roster.

Artisan Talent can help you figure it out and connect you with Graphic and Visual Designers perfect for any project. Call us to find out more or click the button below. 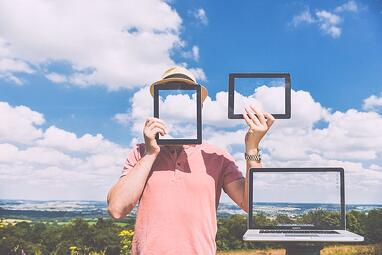 How to Become a Web Designer

Wondering how to become a web designer? Looking to take a new direction in your career or ... Graphic Designer VS Web Designer: Which One Should I Hire?

Wondering what role to hire? Graphic Designer vs Web Designer? It depends on an organization’s ...

A user interface designer often gathers requirements directly from users, which may involve ...