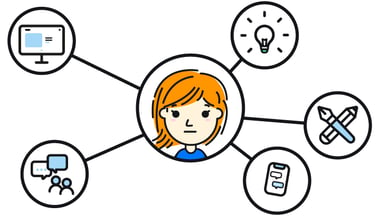 When was the last time you did just one thing at a time?

Most people believe the ability to multitask makes them a better employee. Employers look for multitaskers, believing that these workers are the smartest, most efficient, and most productive.

What if we told you these beliefs were completely unfounded and that multitasking is actually making you less productive and potentially less healthy? It turns out there are all kinds of scientific and anecdotal evidence that confirm the truth. For the most part, multitaskers are the least efficient people in the room.

What Is Multitasking and Why Is It So Prevalent? 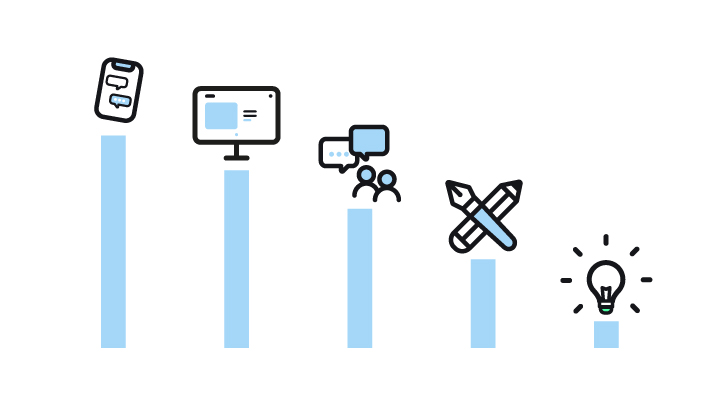 Computers can run multiple functions simultaneously and have been doing so since around 1965 when the term “multitasking” was first used in an IBM training manual. As humans grew more attached to their digital devices, our efforts to mirror computers and conduct parallel tasks expanded. However, our effectiveness at multitasking did not.

Sitting in a meeting and interacting with your peers is one thing, but today, we also answer email and text our spouses while chatting with coworkers about the weekend. For many people, this seeming ability to multitask is something to be proud of. Employers ask about our ability to do six things at once in interviews. Multitasking a normal part of business today, and most believe our ability to do several things at once improves productivity and makes people more efficient.

However, one clinical psychologist calls multitasking “multi-failing” and suggests that the task requiring the highest level of intellectual capacity is the one that will suffer the most when juggling tasks. This could mean you’re not paying enough attention while driving your car because you are also conducting your own version of Carpool Karaoke, reading, doing makeup, and, of course, texting. Less life-threatening but still serious is trying to study for an important exam while also browsing YouTube and, of course, texting. Scientists suggest that your brain just can’t handle the simultaneous stimuli, so the studying you’re doing will be much less productive.

Mental multi-tasking is just as ineffective as task juggling. Switching your attention back and forth only ensures that your best creative intelligence will not fully benefit either problem.

If, at this point, you find yourself rolling your eyes (while texting your BFF that this article is total bologna), we have scientific proof that most people simply can’t process more than one thing at a time. Scientists have weighed in on the issue of human multitasking, and they are unanimously pointing two thumbs down.

The Science Behind Multitasking 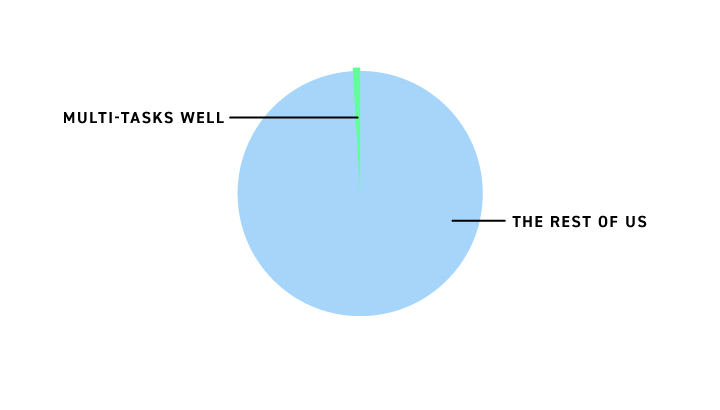 The Cleveland Clinic calls humans “mono-taskers.” They suggest that multitasking, in addition to sometimes being dangerous, can also make us less effective and more dissatisfied at work and in our lives. The research backs up this assumption. For example:

The science shows that we actually reduce productivity by 40% when multitasking. Other research shows that each time we switch between tasks, we release stress hormones, creating a constant barrage of anxiety that threatens our health.

But the pièce de résistance is the research that shows 98% of us don’t multitask well. That means that only 2% of us that handle simultaneous tasks efficiently, so most of us are not working up to our potential because we aren’t tackling one thing at a time. The Cleveland Clinic says that multitasking has a strongly negative effect on:

If you’re still reading this article—good for you! But the question is, how many other things did you attempt while reading it? The science shows us that you’ll be less likely to remember or even comprehend what you’ve read unless you focused exclusively on the task of reading it.

If you’re feeling pulled in a lot of directions today, you are not alone. But this constant diversion of your attention is making you both less effective and a little less healthy. This next section will give you some strategies to get off the multitasking treadmill.

Compartmentalize Versus Multitask—Here’s How to (Really) Be Productive 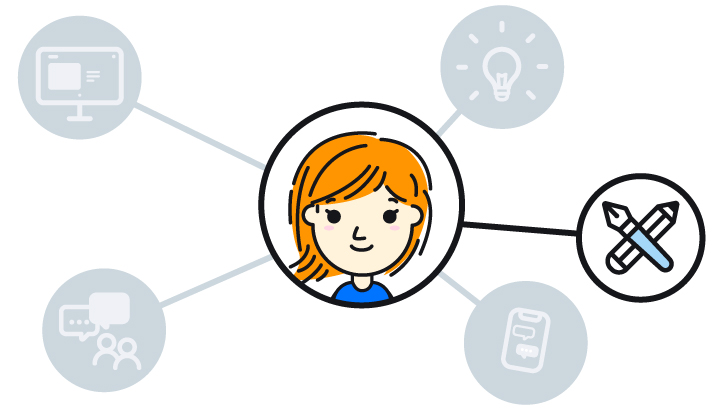 The reality is that today’s hectic lifestyles mean that we all have a lot going on at the same time. But we now know that focusing on more than one thing at a time slows us down. Is there a way to juggle life while still maximizing our efforts to complete tasks? If bombarding our brains with information slows us down, how can we embrace our inner mono-tasker—even for a short time each day—to get more done?

The answer may be something called compartmentalization. The idea comes from psychology, which defines the term as a coping mechanism used when there are conflicts between internal beliefs and external practices. For example, soldiers who have experienced serious trauma must internalize their fear and move on to fight another day. A less extreme example is an employee who doesn’t believe in the philosophy behind their work. Or, perhaps, the employee is dealing with family illness but has to push that aside in order to try to function on the job. In its worst form, compartmentalization represses feelings and memories that can crop up later and cause problems, which is what post-traumatic stress is all about.

But compartmentalization is also very positive, especially when trying to stay organized and get more tasks accomplished. Lifehack says, “To compartmentalize means you have the ability to shut out all distractions and other work except for the work in front of you. Nothing gets past your barriers.” While it may be a classic Scarlett O’Hara from Gone With The Wind—“Oh, fiddle dee dee, I’ll think about that tomorrow”—attitude, compartmentalizing tasks can actually succeed where multitasking fails in the workplace.

Another term for compartmentalization is mindfulness, which is defined as a state where “the mind is fully attending to what’s happening, to what you’re doing, to the space you’re moving through.”

No matter what you call it, compartmentalization or mindfulness puts aside the worries and tasks that lie ahead or behind and focuses on the here and now of the work at hand. Here are some tips for practicing the art of staying focused on one task at a time:

While this new concept will take some time to adjust to, it may be what you need to find work-life balance again. Business 2 Community points out, “If you’ve spent years learning how to juggle several things at once, it can be difficult to suddenly break that habit and change the way you operate.”

But you should break the habit. Women Total Health and Wellness cites multiple studies that show multitasking is actually making us more stressed out and, quite possibly, sick.

10 Apps to Help You Get More Done 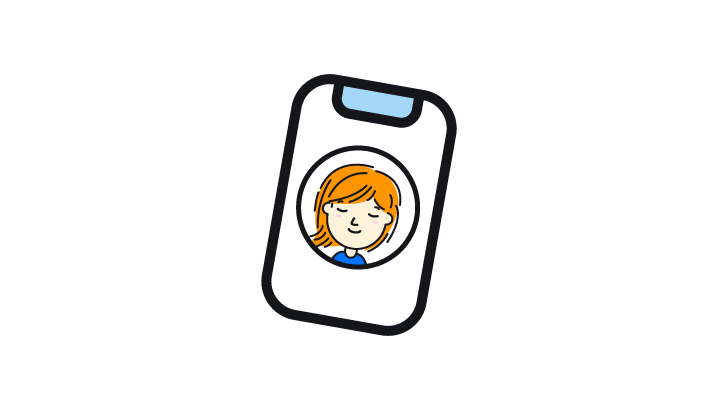 Some of our multitasking madness is thanks to technology and the availability of so much information at our fingertips—but technology can be used for good. There are all kinds of new tools on the market that can help improve time management, mindfulness, and block distractions long enough to help you concentrate. Here are some of our favorites:

We also like OmniFocus, a three-in-one time management, mindfulness, and anti-distraction tool. It’s another app that helps people stay on-task while avoiding the overwhelming distractions of multitasking. Unlike the other apps we’ve listed, it’s a pricey app that may be able to be replaced with a few of the free ones we’ve listed.

Staying focused on one task takes practice and dedication. It also requires you to resist peer pressure to respond quickly to texts or IMs. But the science is clear that all this multitasking is stressing us out and slowing us down.

July 12 is National Simplicity Day. Since we know that a distraction from one specific task makes us unhappy, why not use July 12 as your launching point for a more productive, simpler lifestyle? If you’re focusing on just one thing to benefit your career, get in touch with Artisan Talent now. 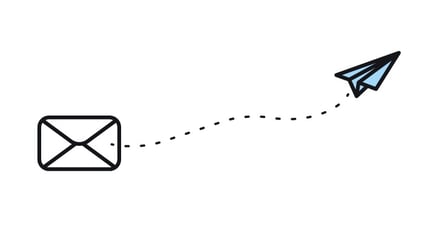 Cold Emailing a Potential Employer: What Works, What Doesn't

Cold emailing, have you tried it? Cold emailing for a job is annoying. At least, they can be. ... 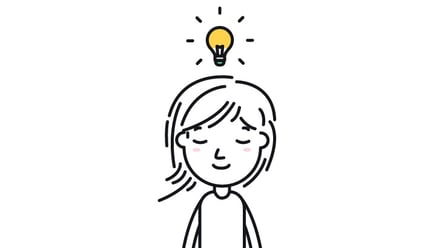 Mindfulness as a Career Tool

If job frustrations are making you take a deep, cleansing breath, you are practicing the art ... 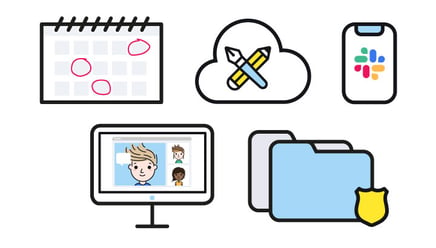 Why You Shouldn’t Be Scared to Hire Remote Workers